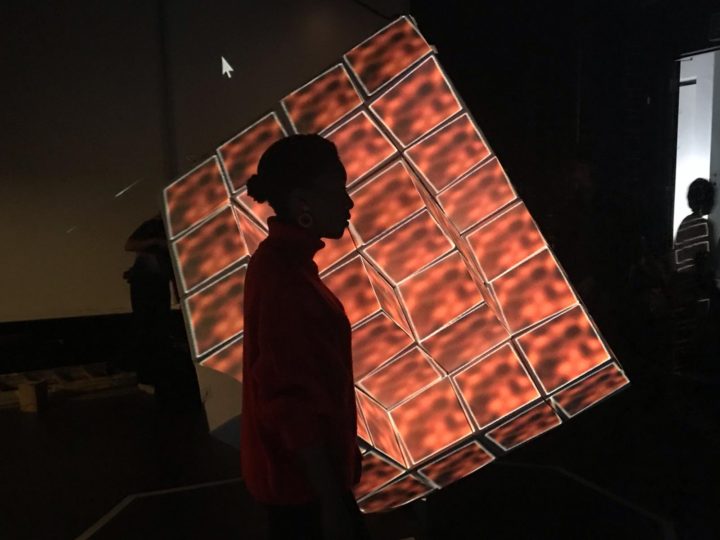 Sorry for your loss- Bokani

'Sorry for your loss' is a  generative, computational art projection mapped onto a multimedia sculpture and an exploration of the different stages of grief. The shape created in collaboration with colleagues, made me think of a mausoleum or what an elaborate gravestone might look like. The act of projecting into the shape evoked reflections on how we project onto funereal artefacts our changing emotions. Each scene represents a stage of grief, namely shock, denial, overwhelming emotions including anger, bargaining, acceptance and finally adaptation.

The projection installation was accompanied by the 'Wreaths' series of paintings, which alongside inspiration from Isaac Julien and Damien Hirst provided the visual inspiration.

In approaching this piece, I reflected on my own losses, past and more recent. I engaged in using code, colour and video to articulate the emotions and experiences that are part of the process of mourning. In thinking about art serving a purpose beyond the aesthetic delight of brightly lit colours, I wanted to explore how art could accompany those going through mourning.

Often art has tackled the subject of death as our inevitable fate, death as the means to the afterlife or as a prompt to live this temporary life to its fullest. I wanted to deal with life alongside death, what happens to those left behind. In the scenes, I wanted to provide a poetic language for some of these experiences such that a viewer who has just had a miscarriage, lost a sibling or close friend could feel that although they have lost, they have not been left alone. In recognising even some of their own experience in the work, they could see that they are connected.

The use of video was strongly influenced by Isaac Julien’s beautiful installations. I wanted to use video of natural weather phenomenon juxtaposed with digital shapes, lines and animations to make the point that despite something of the ‘digital saviour complex’ of our age, there are powers beyond computation which we experience.  For example to express shock, I wanted to use the visuals of lightening and then translate that into the neon lines tracing along the shape at randomised intervals. For bargaining, the simple bouncing ball, searching and trying to follow a ball it will never catch. Then, the sense of being surrounded my many people and yet still experiencing this searching feeling. Finally, as the piece approaches the end, I attempted to use neon shapes, with rainbow colours to show the beginning of a positive outlook. This proved less successful as the colours were not very visible. Simple line thickness might have fixed this. The last scenes use a noise template,  amended to add random colours to show the last stages, acceptance and adaptation. Visually, this was one of the most rewarding aspects to see projected.

The code for the projection was created using openFrameworks in Windows. Using code adapted from libraries provided with the Creative Coding module, I amended these to suit the message I was trying to convey. openFrameworks addons such as ofxPiMapper made the projection possible, while the scenes were managed using ofxJSON. I experienced several crashes and inevitable errors for example with the XML files and JSON folders which needed updating. Familiarity with these will no doubt make a difference to the overall quality of the artwork, making the most of the effects possible with the mapping process.

Further development of this work would include smoother operation of the transitions between scenes, more sophisticated use of animation as a starting point. In addition, I would want to refer more directly to artists such as Picasso in using blue lines for the bleak depression stage or portraits in blue. Closer alignment between the scenes and the paintings of the wreaths would make this work more complete to me. Finally, a responsive work that allowed captured the viewers expression or body language and somehow mirrored this subtly to better emphasise empathy. I would then like to make this a series, four seasons (a theme I have worked with before), seven deadly sins and

This first attempt at a finished artwork using computational art was very challenging. I am pleased that I realised some of the output which an ambitious concept demanded but recognise that even when the scenes played, which was a small victory, it was a manual process to play them which was deeply frustrating. There is more work which I am continuing with to improve this piece but I am glad I stuck to the overall vision and concept.

How to convert ofColor from RGB to HSB in 007

A Brief History Of Artists Grappling With Loss And Death