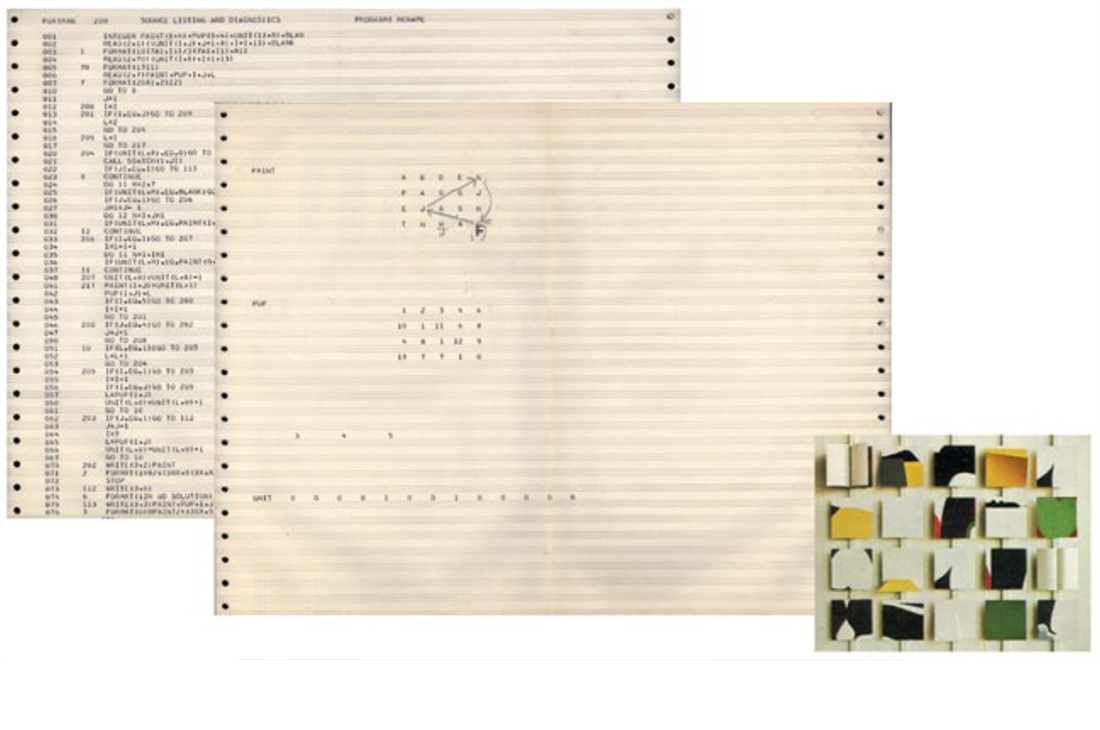 The Notes series of prints are based on archive material relating to each of a number of critical steps in my work. They are, perhaps, part digital collage and part concrete poem. Shown on the right in this one is the construction that I made in 1968 and 1969 called Nineteen. Whilst computers had nothing to do with any of the square elements that made the piece up, I used a computer program to help me determine which piece went where. On the left is part of that program, written in the computer language Fortran. I specified a set of conditions that should (or should not) be met, such as that two particular pieces should not be on the same row or column, and the program searched all possibilities for a solution that satisfied my requirement.

In fact, in the three hours of computer time available to me (it was 1968) a solution was not found, although the computer came close. In the centre is a print out of the near solution with my pencil notes on how I could see a full solution by slightly modifying what the computer program had produced. In that way, a computer program, with a little help from me, solved the problem that I had set myself in completing Nineteen.

So this Note print represents where I started writing computer programs as part of my art, beginning with the single mainframe computer that Leicester Polytechnic, where I worked, owned at that time. Arranging the elements of the 20-part relief by writing a program I realized that the systems that I, and others, used in our art could be described in computer programming languages. Once programming became used in art, the form of art now known as ‘Generative’ appeared. It is important to point out that art made by computer programming is not to be equated with Digital Art in general. The latter includes all

kinds of ways of making artworks that involve computers, the Internet or digital data and may not involve the artist in writing programs at all. When a program is the medium, the artist is encapsulating rules and procedures in a formal description and arranging for a computer to act out the consequences. This makes programming an obvious extension to the methods used in the art of the British Systems Group, for example. In this sense, the constructive tradition might be said to continue to break new ground through artists writing computer programs.